As the hot days continue, We’re in search of cooling waterfalls around the Joetsu Myoko area to film. This time, we’ll introduce “Phantom Otaki” in the Hayama area of Kamikozawa, Myoko City, Niigata Prefecture.

“Phantom Otaki” is a 40m high waterfall located on the Baba River. It takes about 30 minutes to walk to the falls, along the forest road from the parking lot in Kamiozawa, Myoko city, Hayama.  Why is it called a phantom? The reason is that it didn’t used to appear on any maps.  When it was introduced on TV in 1993 it was called the “Waterfall not on the map”. Since then many media have picked up on the story, and it has attracted a lot of attention.  It was also used as the location for the movie “Ecotherapy Getaway Holiday (Taki o mini iku)” released in 2014.  The nearby local exchange facility, Otakiso, operates a hot spring facility using the mineral springs from this waterfall. 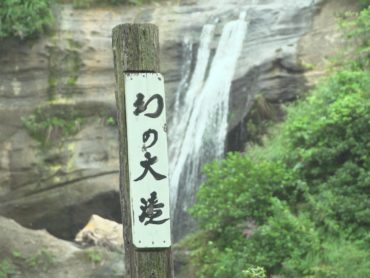