As the hot days continue, we’re in search of cooling waterfalls around the Joetsu Myoko area to film. This time, we’ll introduce “Soumen Falls” near Tsubame Onsen in Myoko, with a height of some 50 meters.

You can find Soumen Falls after walking about 10 minutes along the path from Tsubame Onsen, Myoko, after the end of Prefectural Road 39.  It can be seen on the way to “Soutaki Falls” which has been named one of the 100 best waterfalls in Japan.  Soumen Falls run down the left bank of the Otagiri River, with a drop of about 50 meters. Although it is not a powerful waterfall per se, it is unmistakable.  It looks like cool soumen noodles picked up with chopsticks. 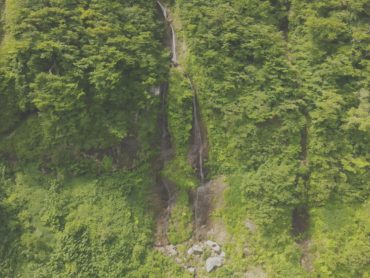