5th Anniversary of Hokuriku Shinkansen & Tokitetsu
A “Railway Festival” will be held on Saturday, October 17th in Itoigawa!

A commemorative event “Railway Festival” will be held around Itoigawa Station in Niigata Prefecture on Saturday, October 17th.  This event celebrates the 5th anniversary of the opening of the Hokuriku Shinkansen and Echigo Tokimeki Railway.

The “Railway Festival” was originally scheduled to be held in March, but it was postponed due to the effects of COVID-19. It will be held simultaneously at three venues around Itoigawa Station, Nou Station, and Omi Station this fall. 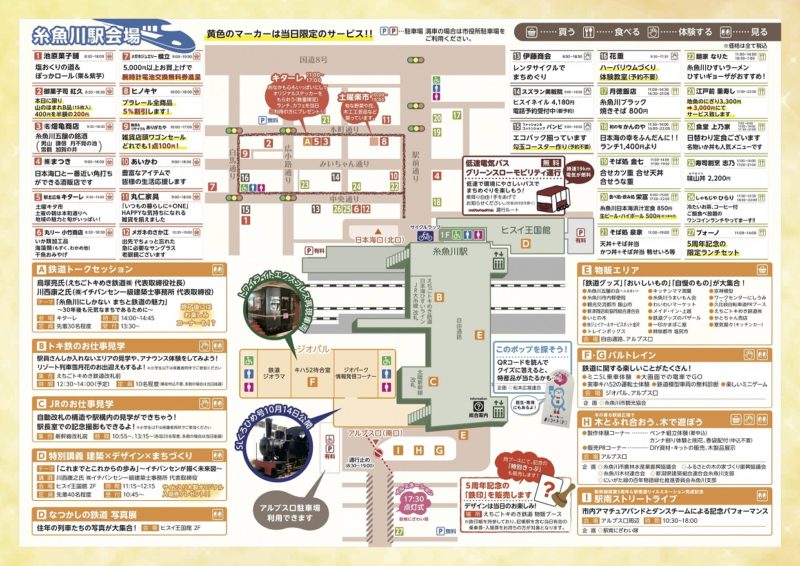 At the main Itoigawa Station venue, a talk session will be held by Mr. Akira Torizuka, President of Echigo Tokimeki Railway Co. Ltd. and Mr. Yasuyuki Kawanishi, President of Ichibansen Senior Registered Architect Office, which was in charge of the design of the Setsugekka train.  In addition, various events will be held, such as a product sales area full of delicious gourmet food, a work tour by railway staff, a railway photo exhibition, a mini steam locomotive ride experience, a woodworking experience, and a street live performance.  In addition to the station premises, there will be special events at each shop in front of Itoigawa Station on the day of the event.

The organizer said, “we planned fun events that make use of the characteristics of each station, it’s not only at the Itoigawa station venue, but also Halloween decorations at the Nou venue, and making canned stones at the Omi venue.  Please spend an autumn day enjoying the railway.  Fireworks will be released simultaneously at the three venues from 10 o’clock on the day.”

The “Itoigawa Halloween Quiz Rally” will also be held from October 17th (Sat) to 30th (Fri) to coincide with the festival.  This is an event that involves taking a train, or walking around the city of Itoigawa to answer quizzes located at the designated points.  You can get a map for this rally event at Itoigawa Station, Nou Station, and Omi Station.  Why don’t you join in as well?