A citizens’ group in the Naoetsu area of Joetsu City, Niigata Prefecture, and a confectionery store have jointly developed and begun selling a new type of monaka, “Meika Misenmai,” featuring the history of the local “Kitamaebune” and the summer Gion Festival “Osenmai” (Gion Festival). 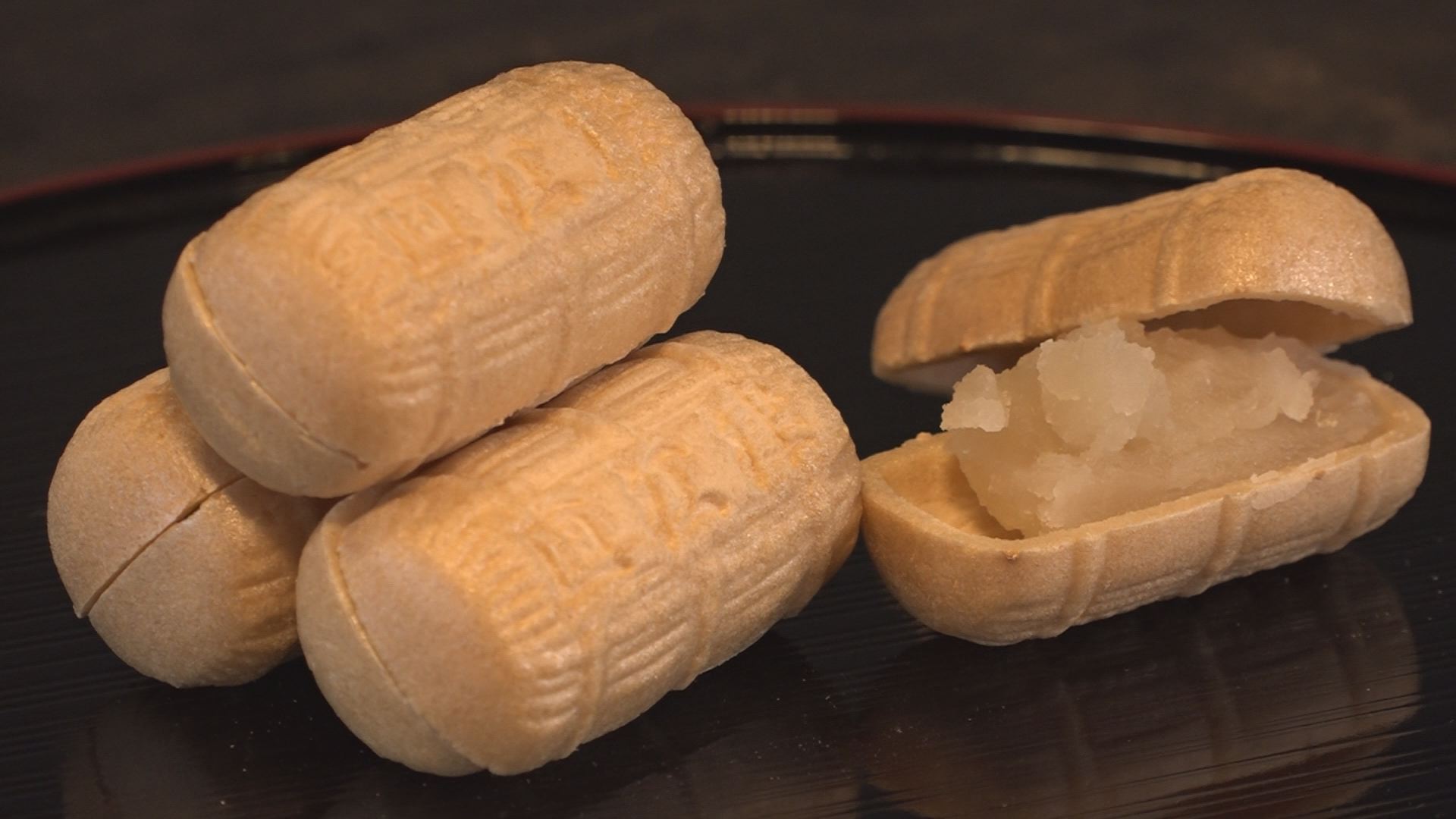 This is the jointly developed “famous confectionery, Okuramai. The rice-ring-shaped monaka is about 6 cm long, and the word “Naoetsu” is written on the skin. The filling is a slightly salty white bean paste. 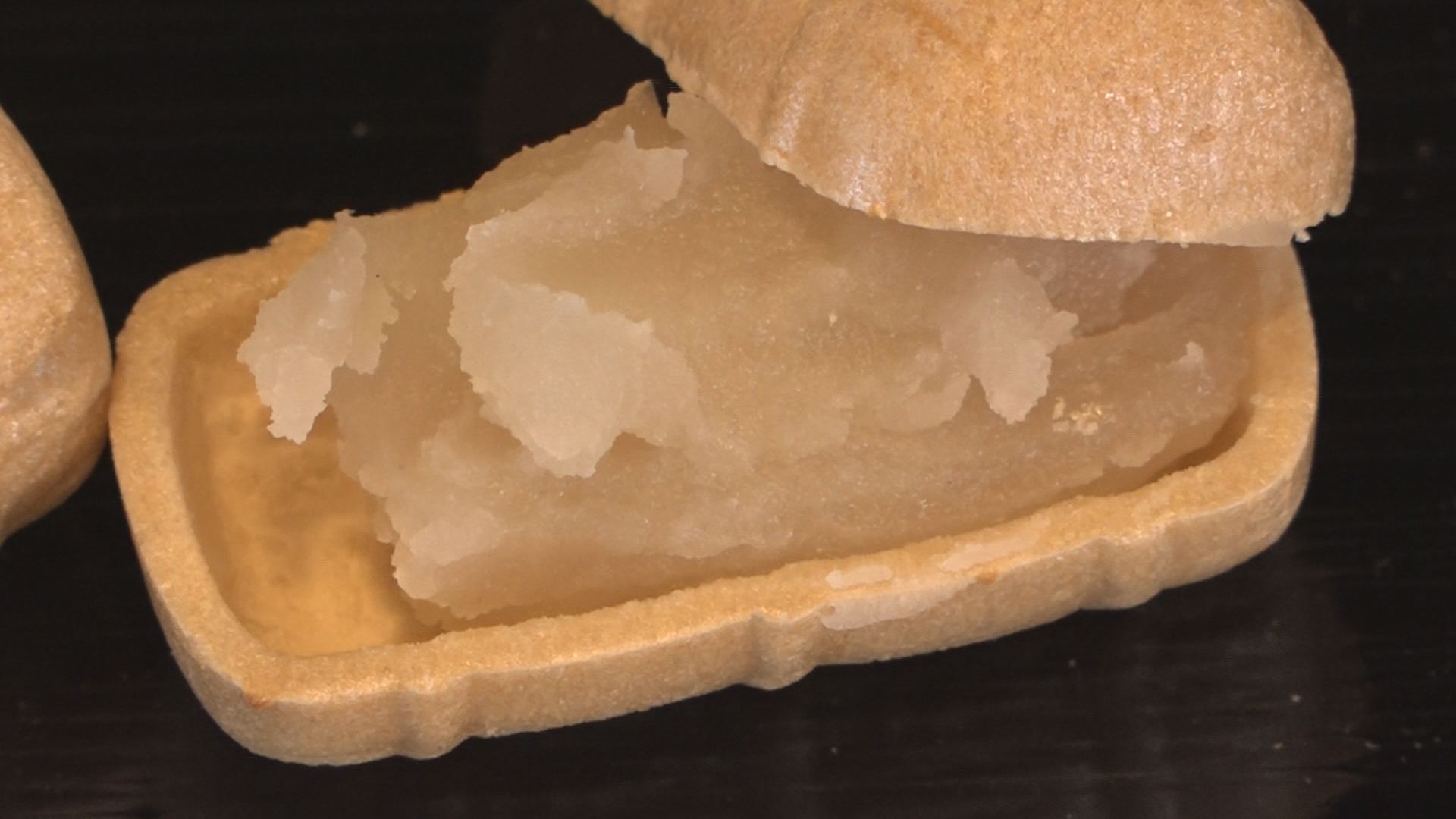 Okramai was jointly developed by “Machiokoshi Naoetsu,” a citizen’s group in Naoetsu, and “Minoya Confectionery,” also known for its “Keizokudango. Machiokoshi Naoetsu has so far produced three Naoetsu-themed confections with local companies.This time, the development was promoted to promote the history of Naoetsu as a port of call for Kitamae-bune, which shipped “Okuramai” from the Takata Clan and the Shogunate’s territory to Edo and Osaka and traded with the Seto Inland Sea and Hokkaido.

Mr. Kazuo Sato, representative of “Machiokoshi Naoetsu
The Takata clan’s records show that a lot of rice from the storehouse was shipped out as official business. We asked the Takata Clan to develop this product in order to promote it somehow. We hope you will take it as a souvenir and promote Naoetsu throughout Japan. 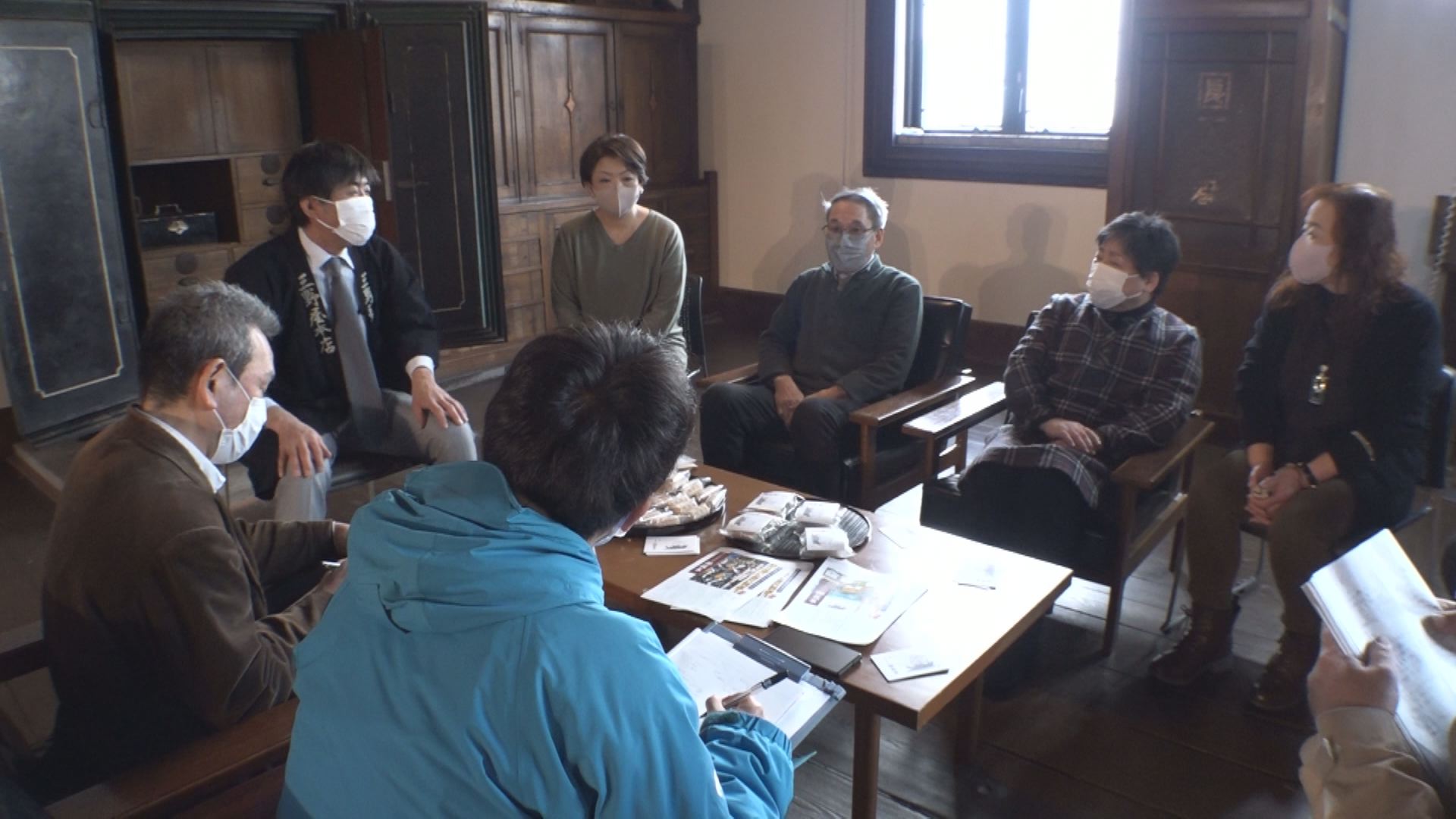 Minoru Shigehara, representative of Minoya Confectionary Shop
The skin of the rice-bale-shaped monaka. We developed it using our signature white bean paste, which is also used in Keizokudango, based on the premise that the inside is filled with rice. We heard that salt from the Seto Inland Sea was the center of trade for the Kitamae Ship, so we added just the right amount of salt to the white bean paste to create a product that also promotes Naoetsu’s port and the sea. 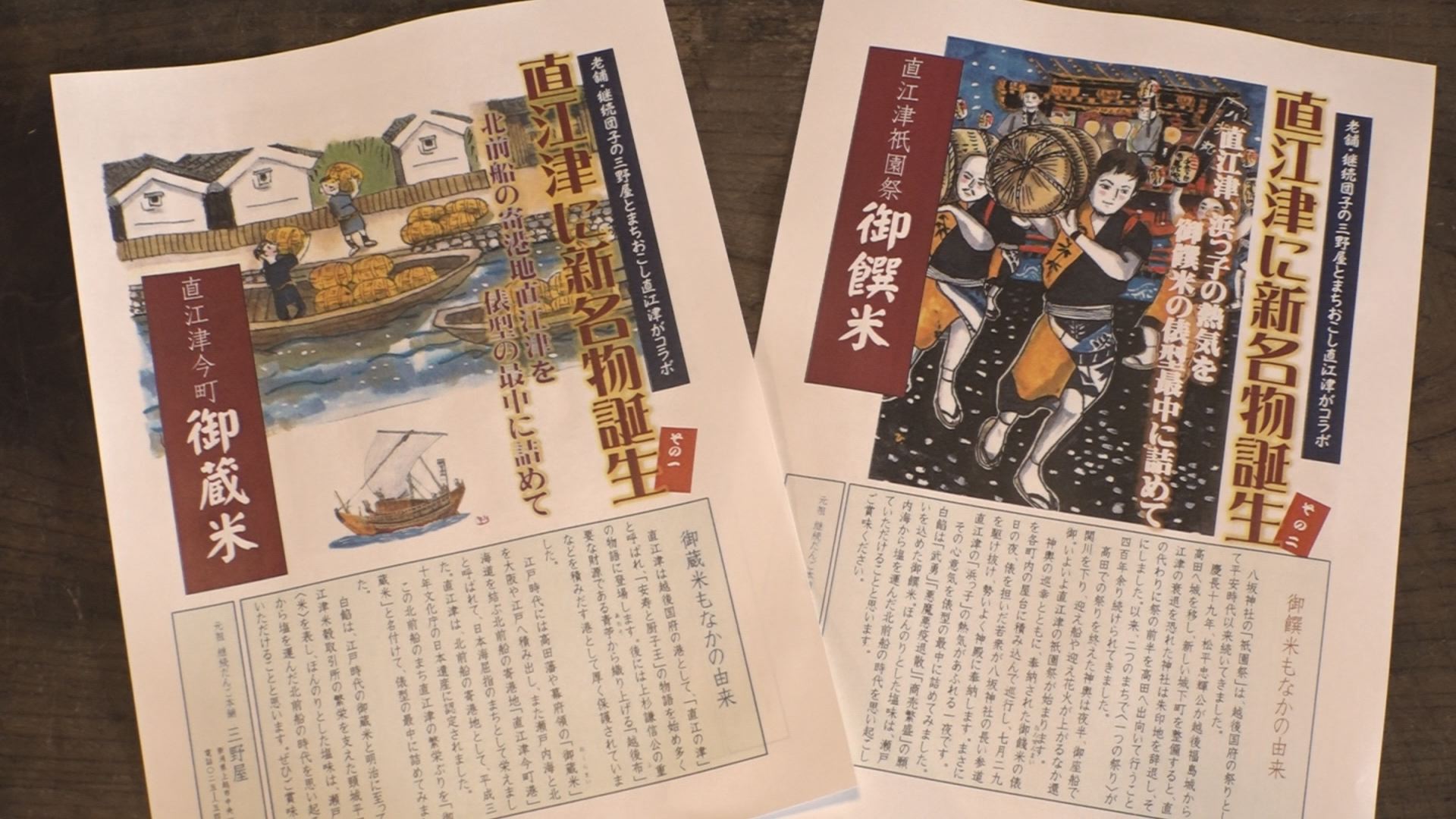 In addition, in keeping with the history of the Kitamae-bune (Kitamaebune), we also wanted to incorporate the finale of the summer Gion Festival, “Osenmai,” into our confections, so we decided to sell our products year-round under the name “Okuramai,” and only in July and August under the name “Osenmai. 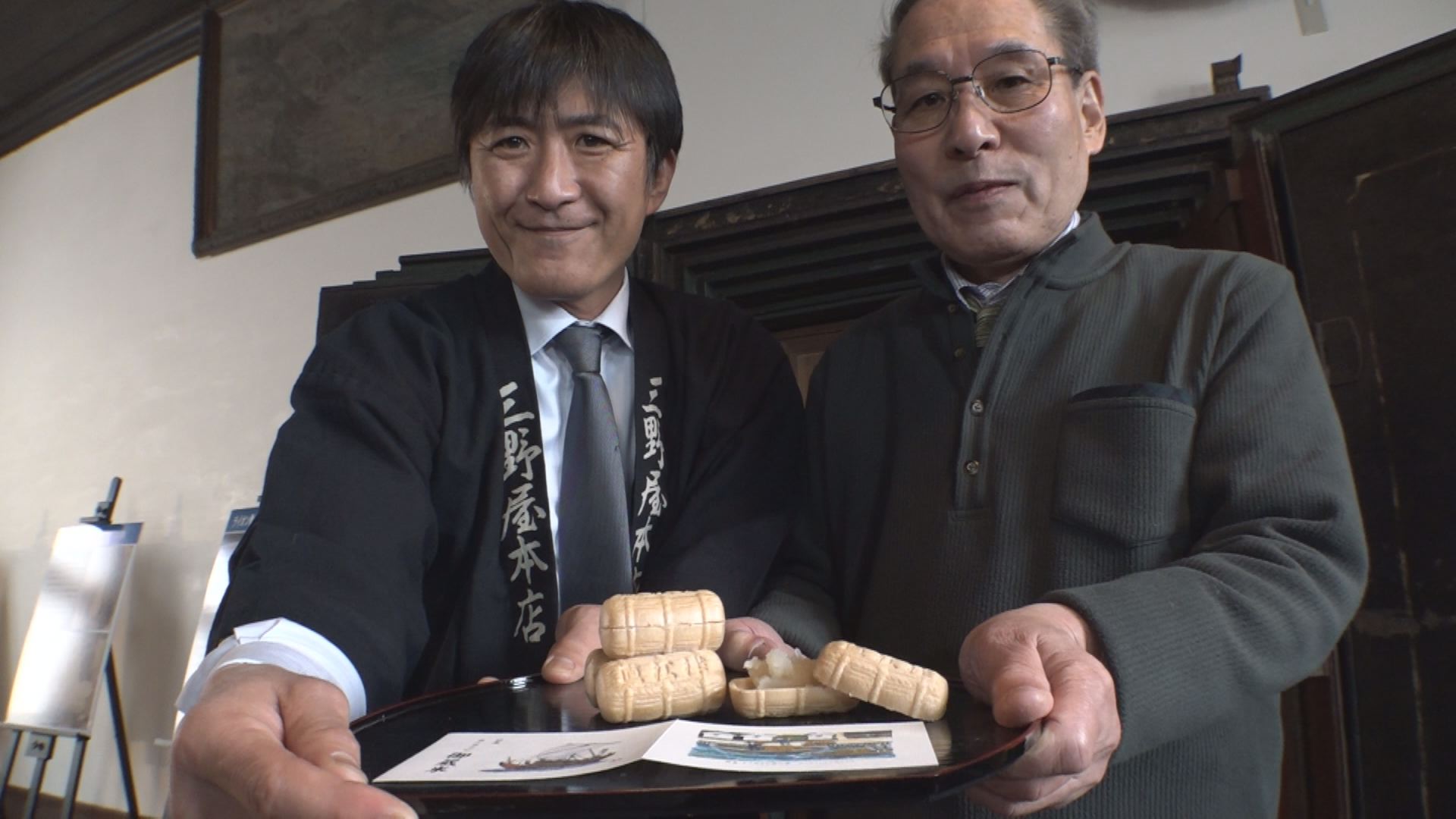 Representative Shigehara
I was able to kill two birds with one stone by creating a confectionery that also promotes the Gion Festival, which I love. I hope it will be used as a tool to promote the region, and I hope it will become a product that will make people in the region feel the goodness of their hometown, saying, ‘Naoetsu is great.

Each “Meika Okoramai” costs 140 yen (tax not included). It is already on sale at the main store of Minoya Confectionery, and will be widely promoted at the “Spring Naoetsu Bread and Sweets Festival” to be held at MUJI Naoetsu this weekend (Saturday, December 12).