The annual “Hina Tour” in Takada, a castle town 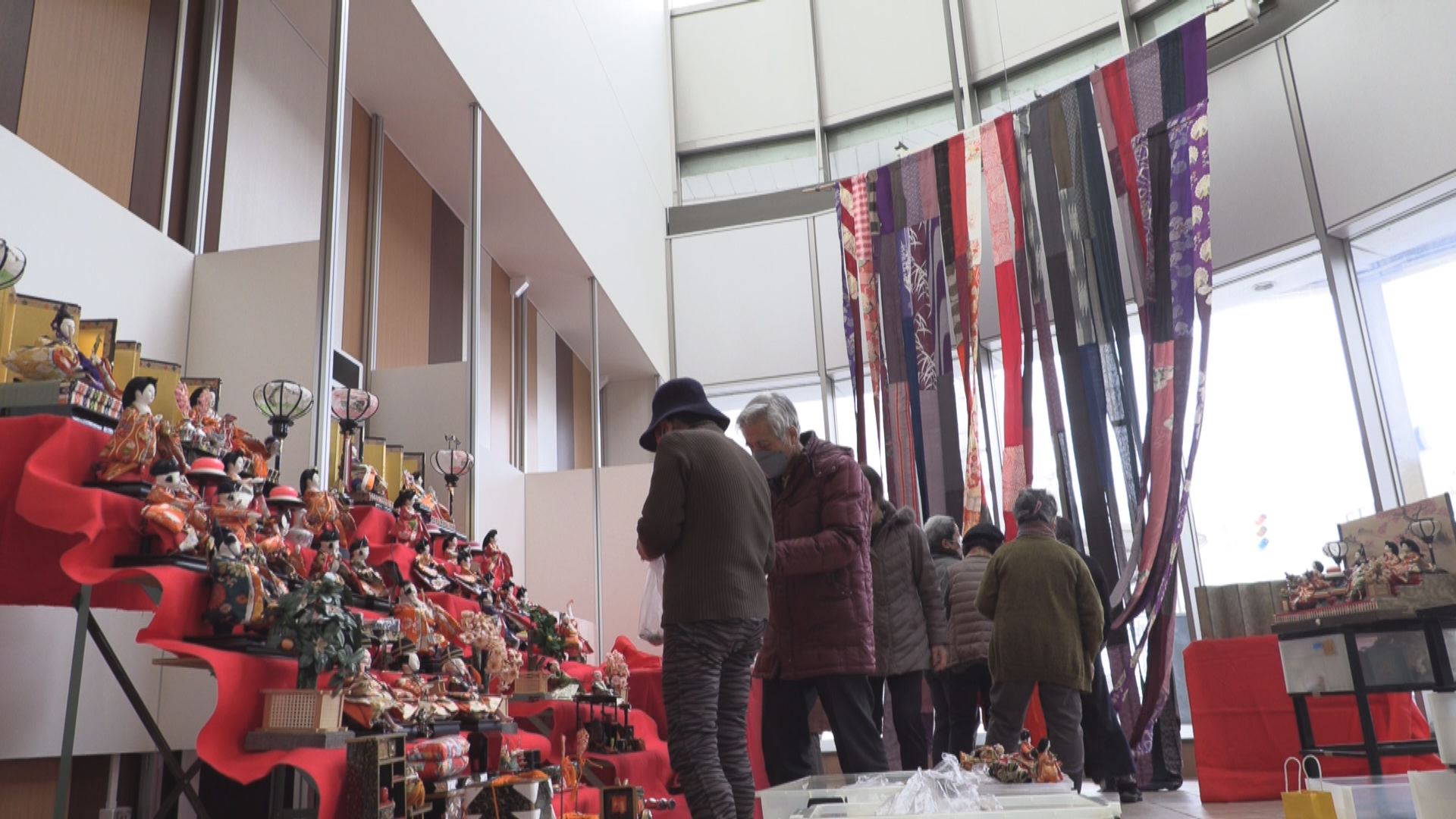 The decorations were put up by a federation of shopping street promotion associations in Honmachi 3-chome to 5-chome and a citizens’ group called “Onmadashi Project. One of the venues, Asutopia Takada, was lined with about 100 dolls donated by the city. 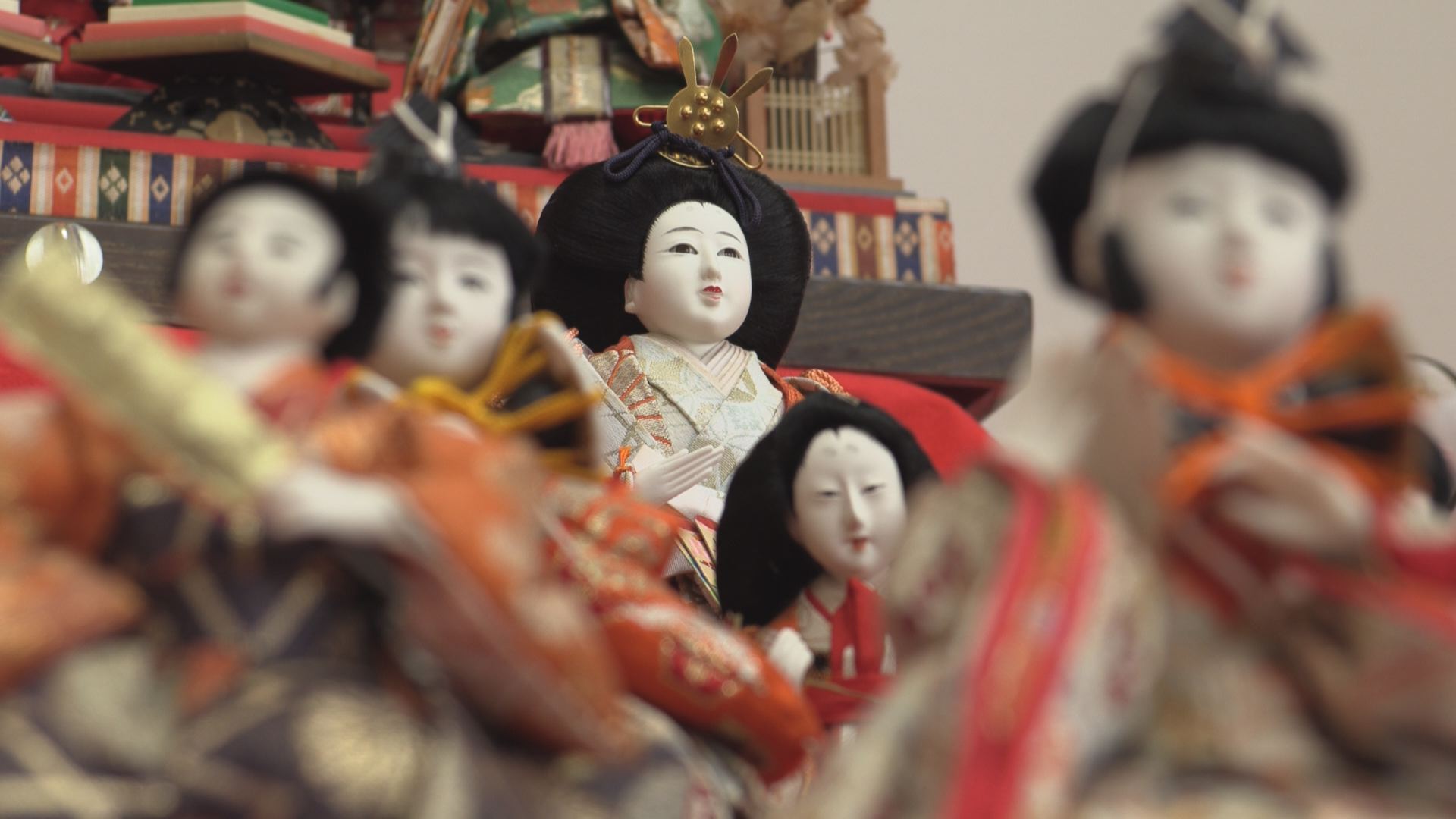 The oldest of these was made during the Meiji era. 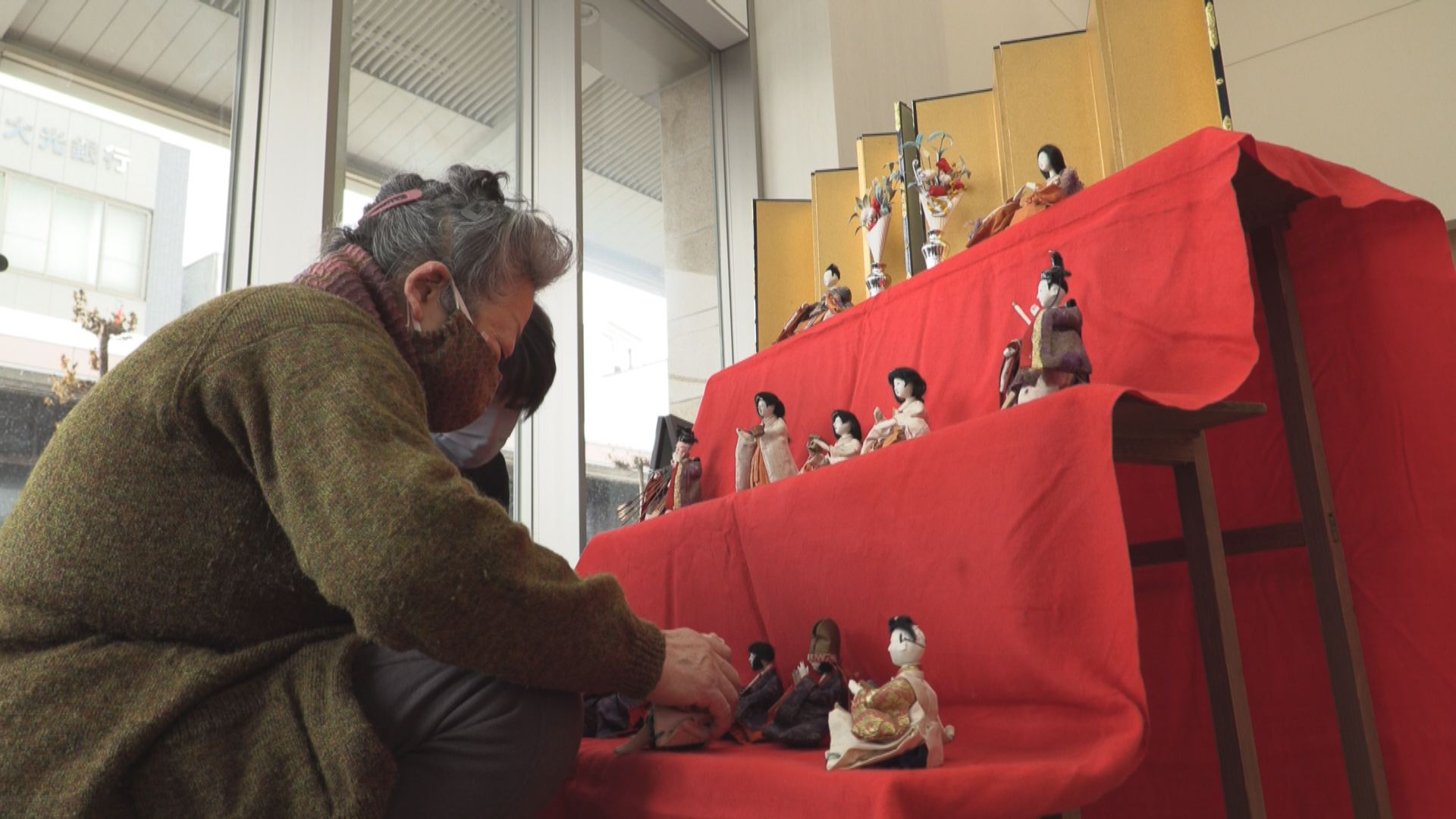 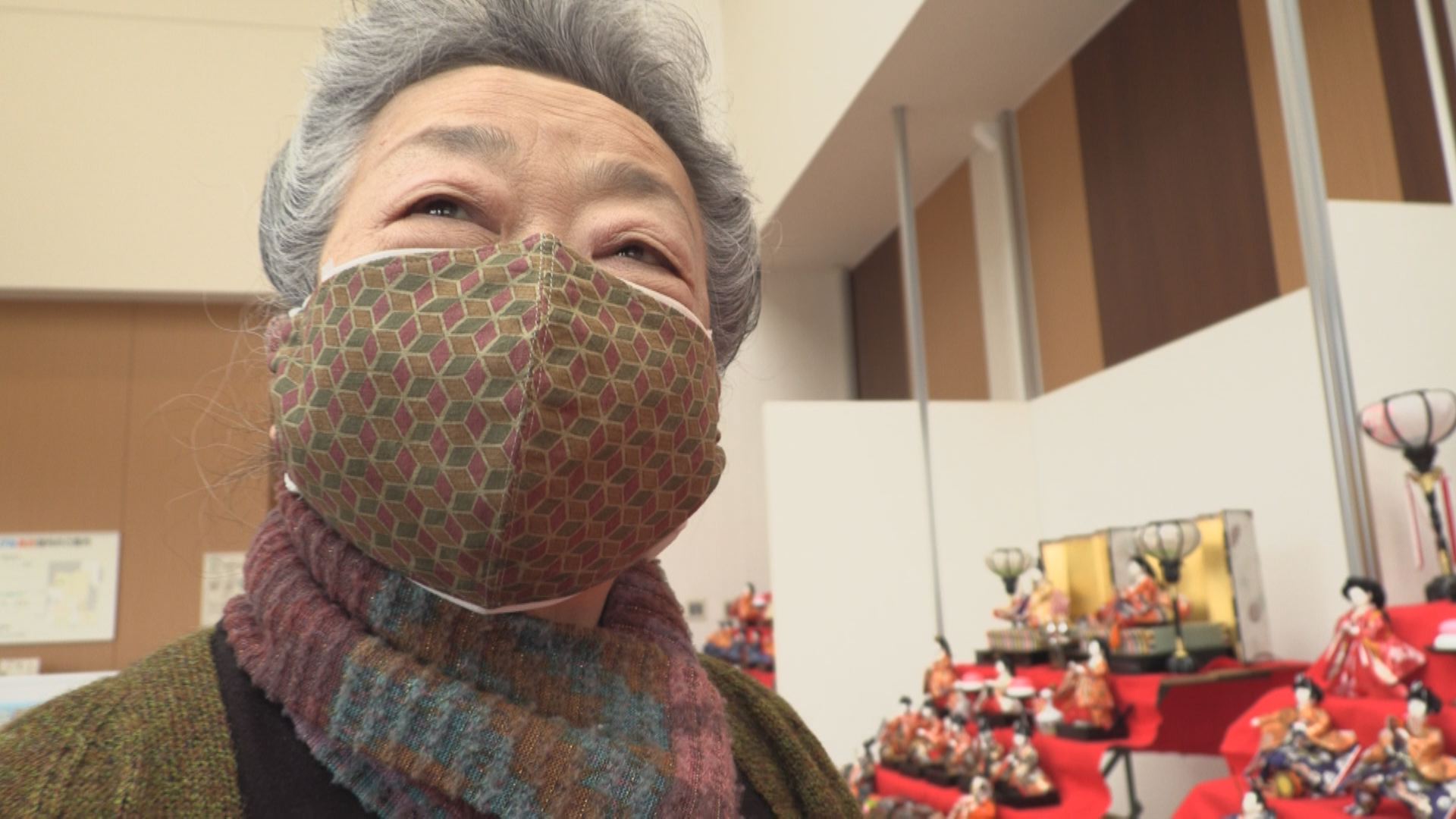 Oma Dashi Project: Ms. Kineko Miyakoshi
It’s a tough time (in Corona), but seeing the red scarlet carpet (the cloth below) cheers me up. 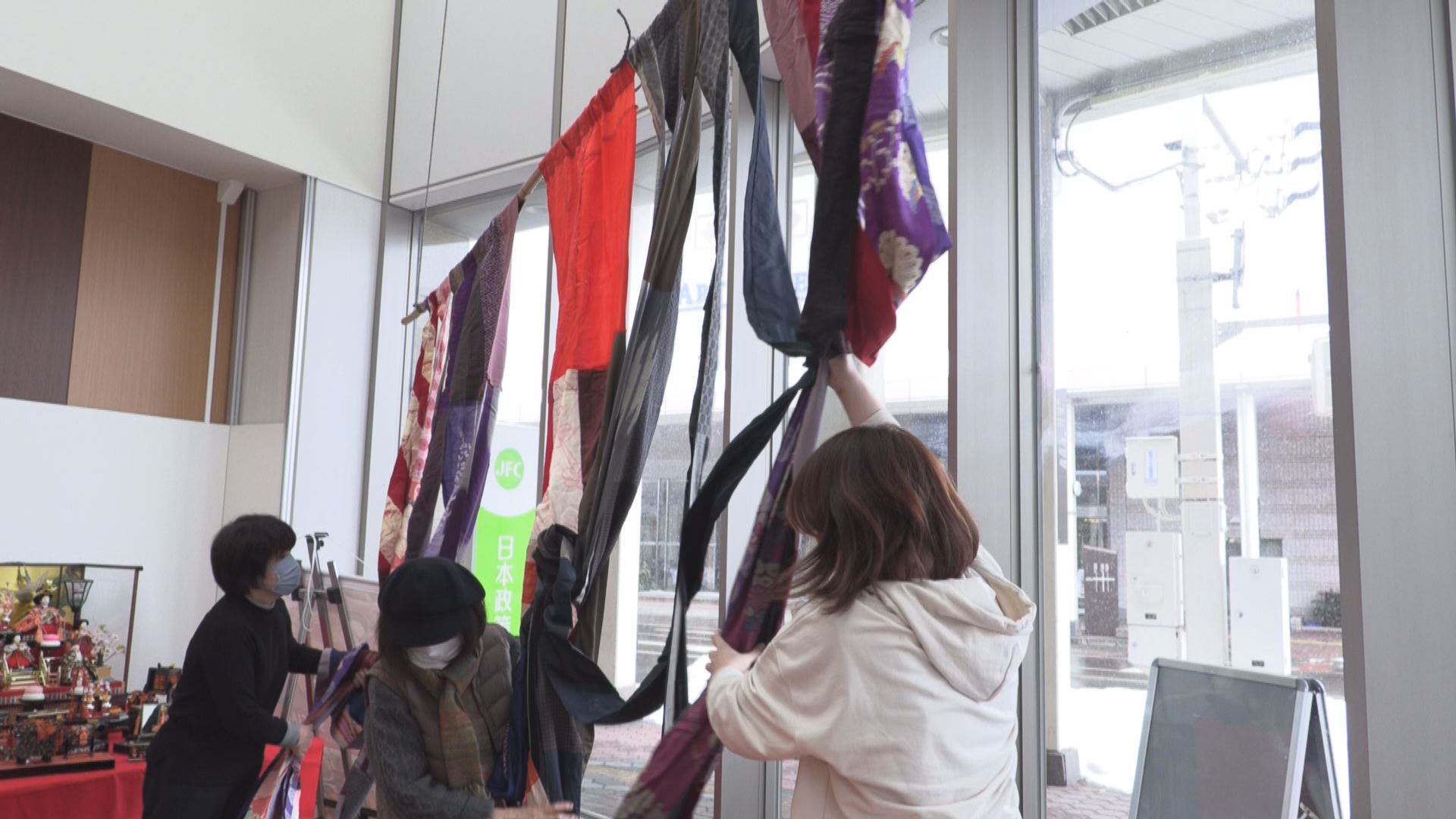 A curtain made of bundles of old kimono fabric hung in the hall, adding to the splendor of the event.

A visitor said
I’m glad to see it. I hope spring will come soon.

In addition, 16 stores will be selling sweets and other items that are only available at the event. There will also be a sticker rally where shoppers can collect stickers to win prizes.

On the other hand, the planned picture signboard tour and concert have been cancelled due to the expected extension of the priority measures to prevent the spread of the disease. 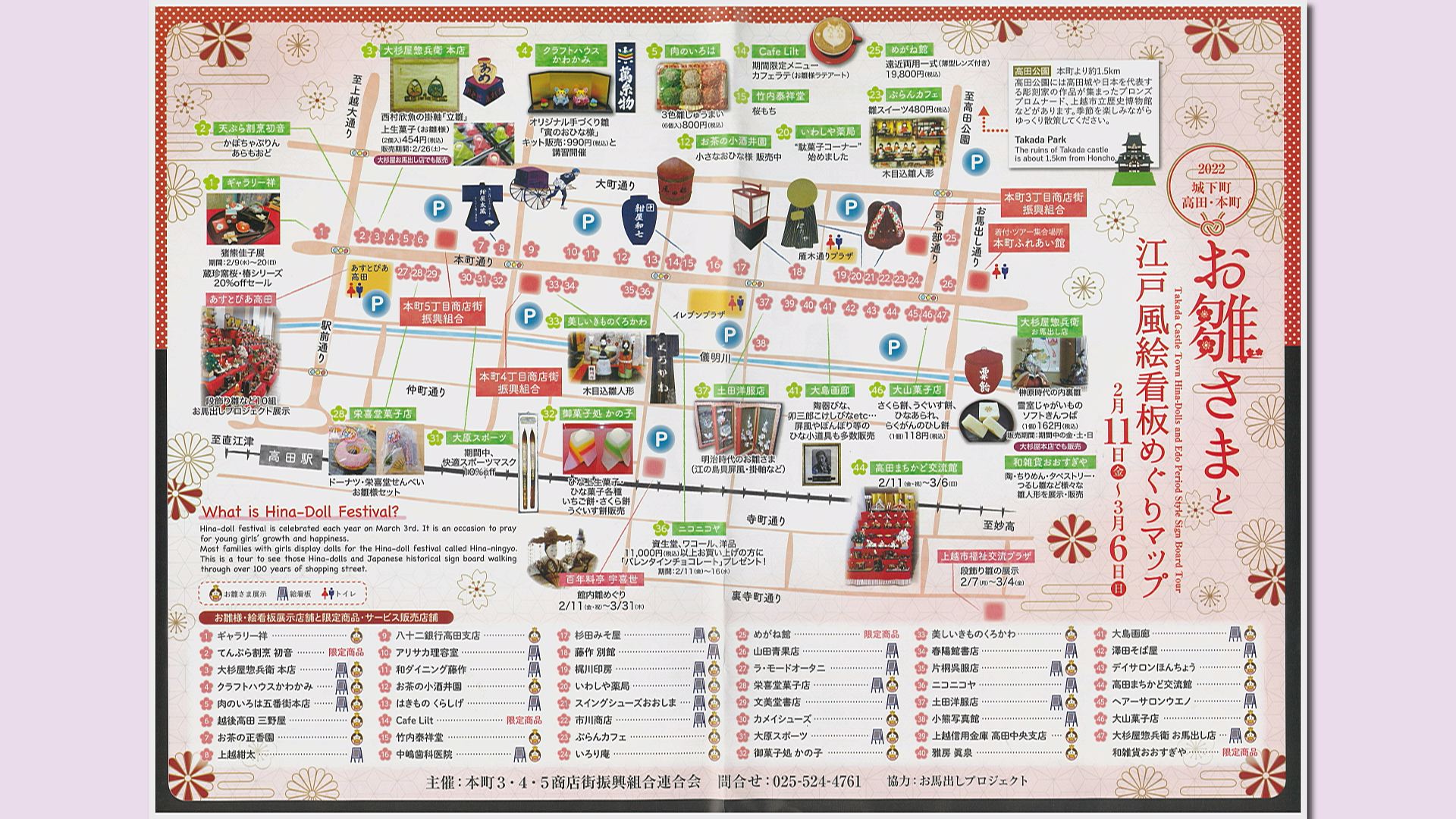 Mr. Takayama, Representative Secretary of the Federation
It is difficult to go out far from the community. On the contrary, I would like you to go out with a small group of people to the shopping streets in your neighborhood and enjoy the early spring. 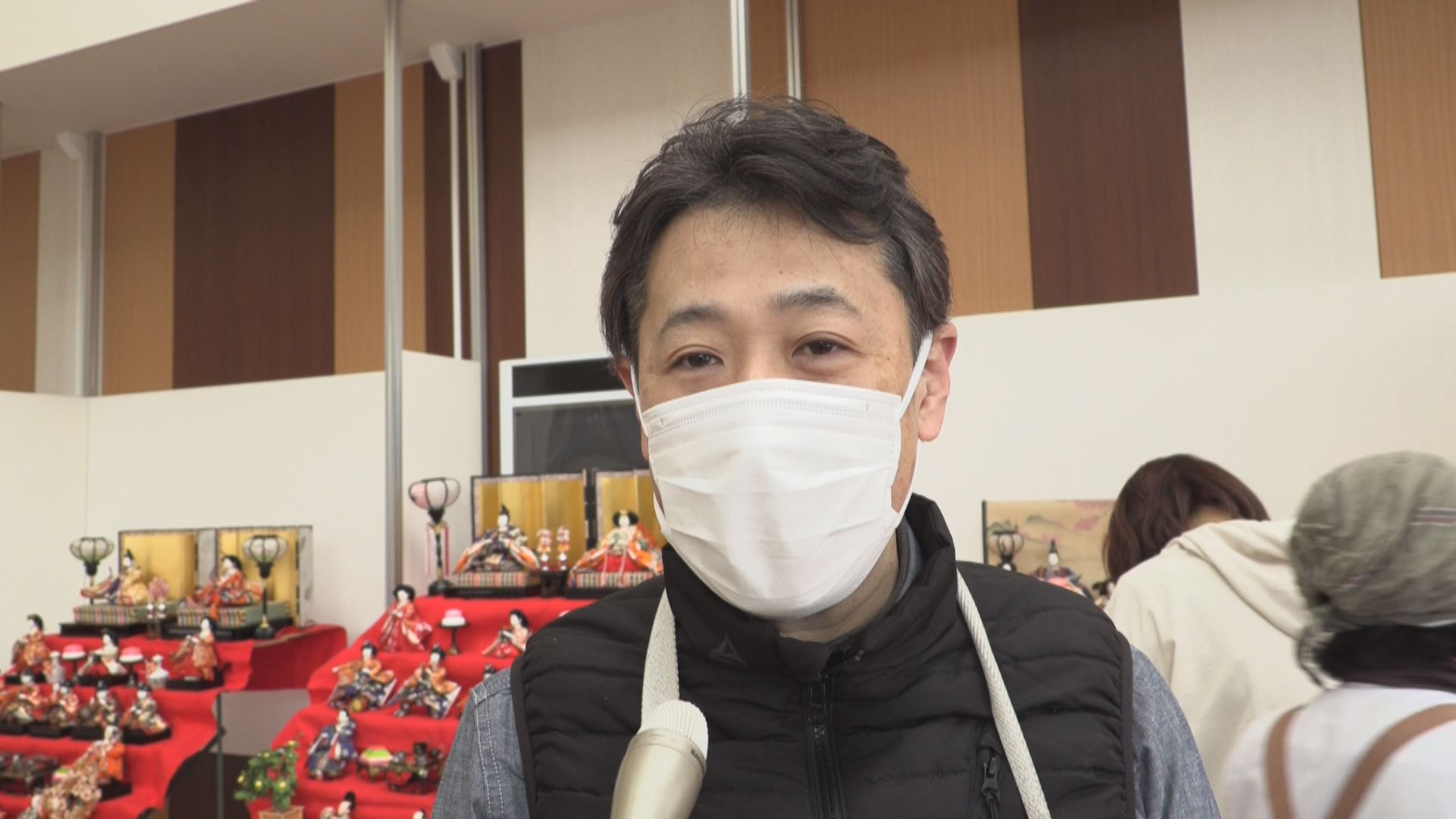 Hina Dolls in the Garden? First exhibition of “Zashiki Hina

In anticipation of the peach festival, the Sakaguchi Memorial Hall in Unoki, Joetsu City, Niigata Prefecture, has begun its annual display of hina dolls and tsurushi-hina dolls. 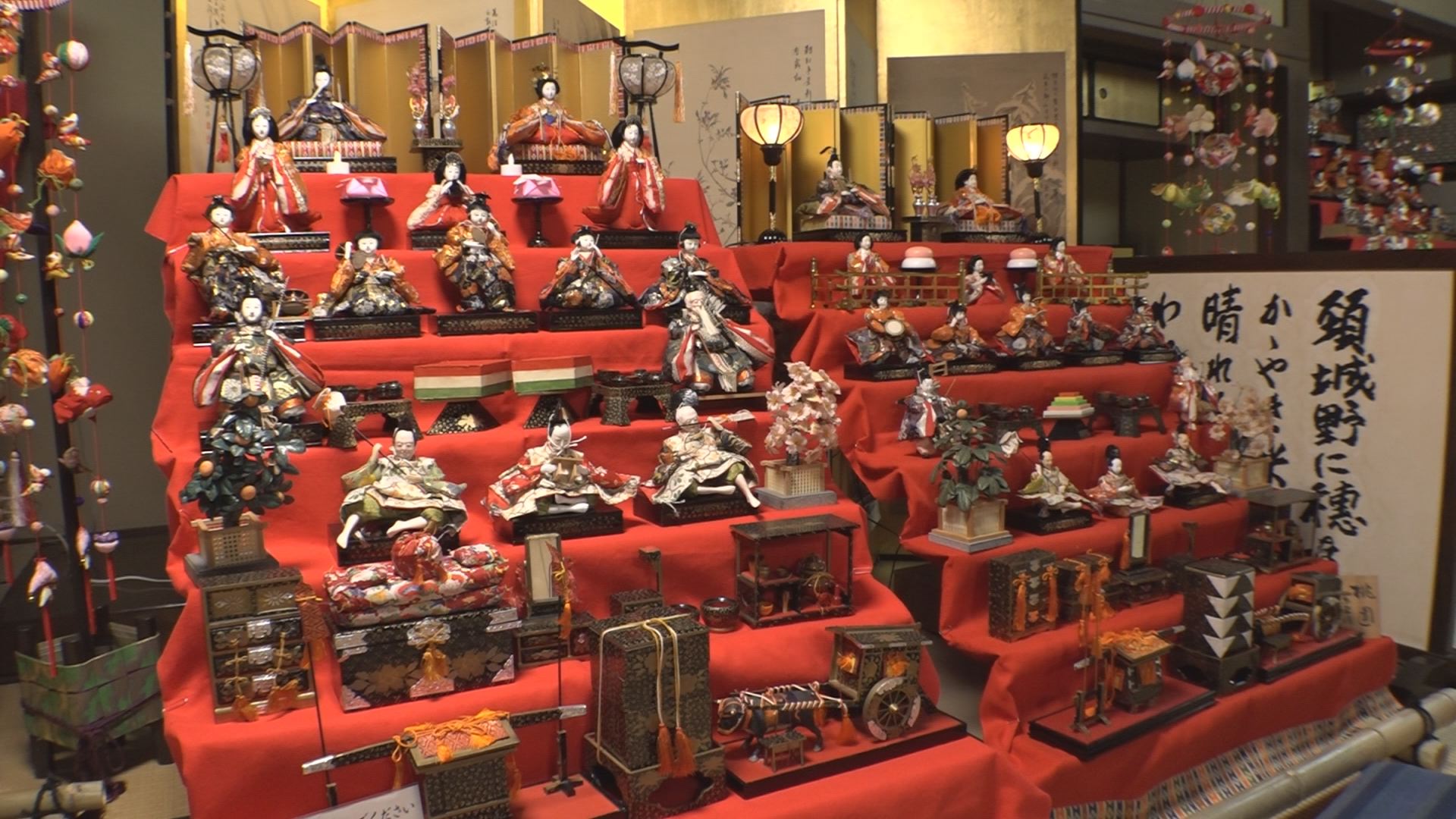 At the 180-year-old traditional house, Raku Ui-an, there are about 300 dolls, including seven-tiered ornaments and handmade dolls. Many of the dolls are donated by citizens, and the number is increasing every year. The oldest doll was made 80 years ago in 1942, and its face is made of ceramic. 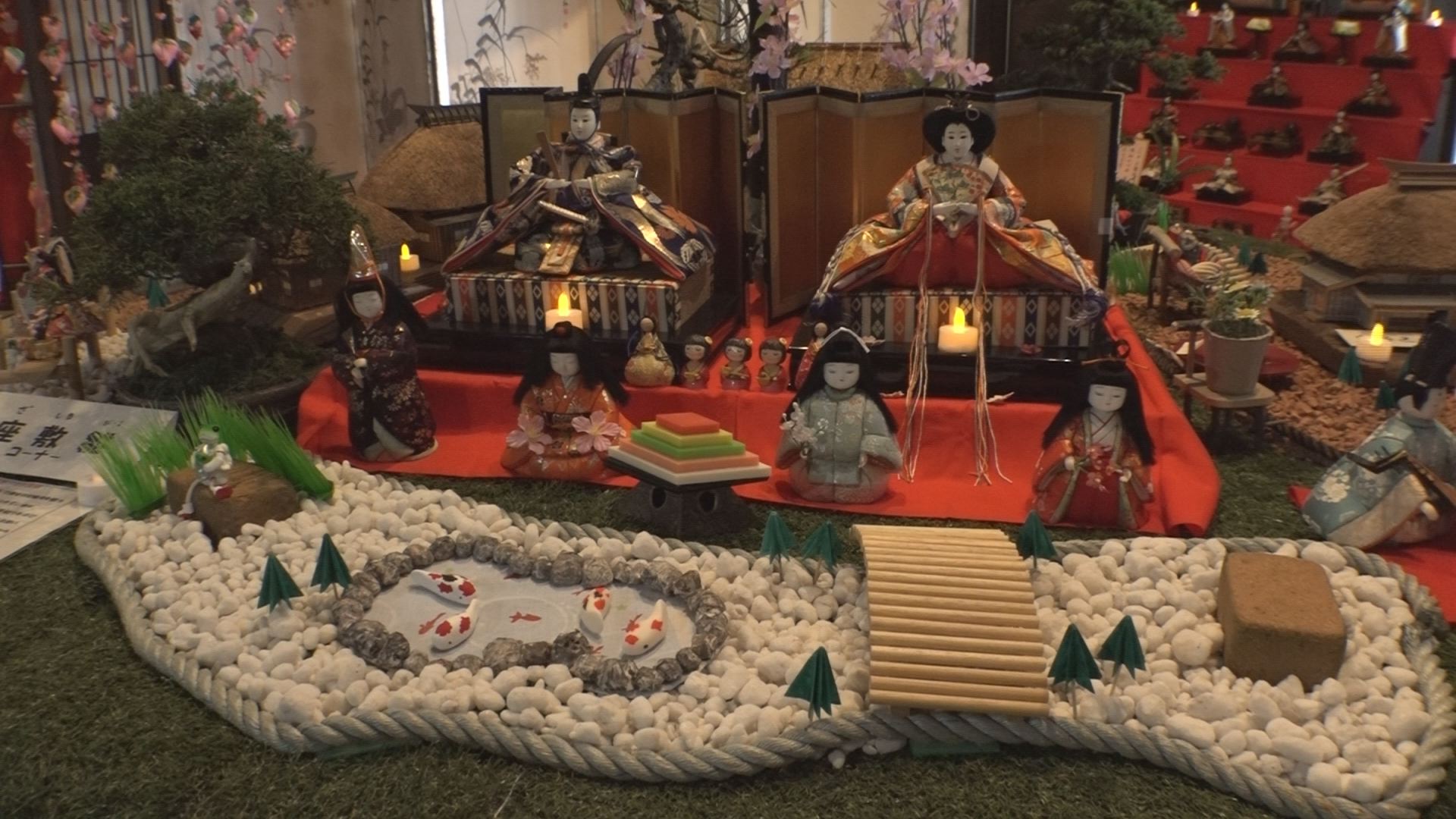 This “Zashiki Hina” is on display for the first time this year, and is to be displayed at an event celebrating the first birthday of the eldest daughter in Yawatahama City, Ehime Prefecture. A miniature garden is created with bonsai trees, etc., and the Uchiura Hina is placed in the center of the garden to represent a courtly garden party.

We used a model of a roof made of thatch, which was stored at the former Bogane Elementary School in Aasuzuka-Ward, Joetsu City. 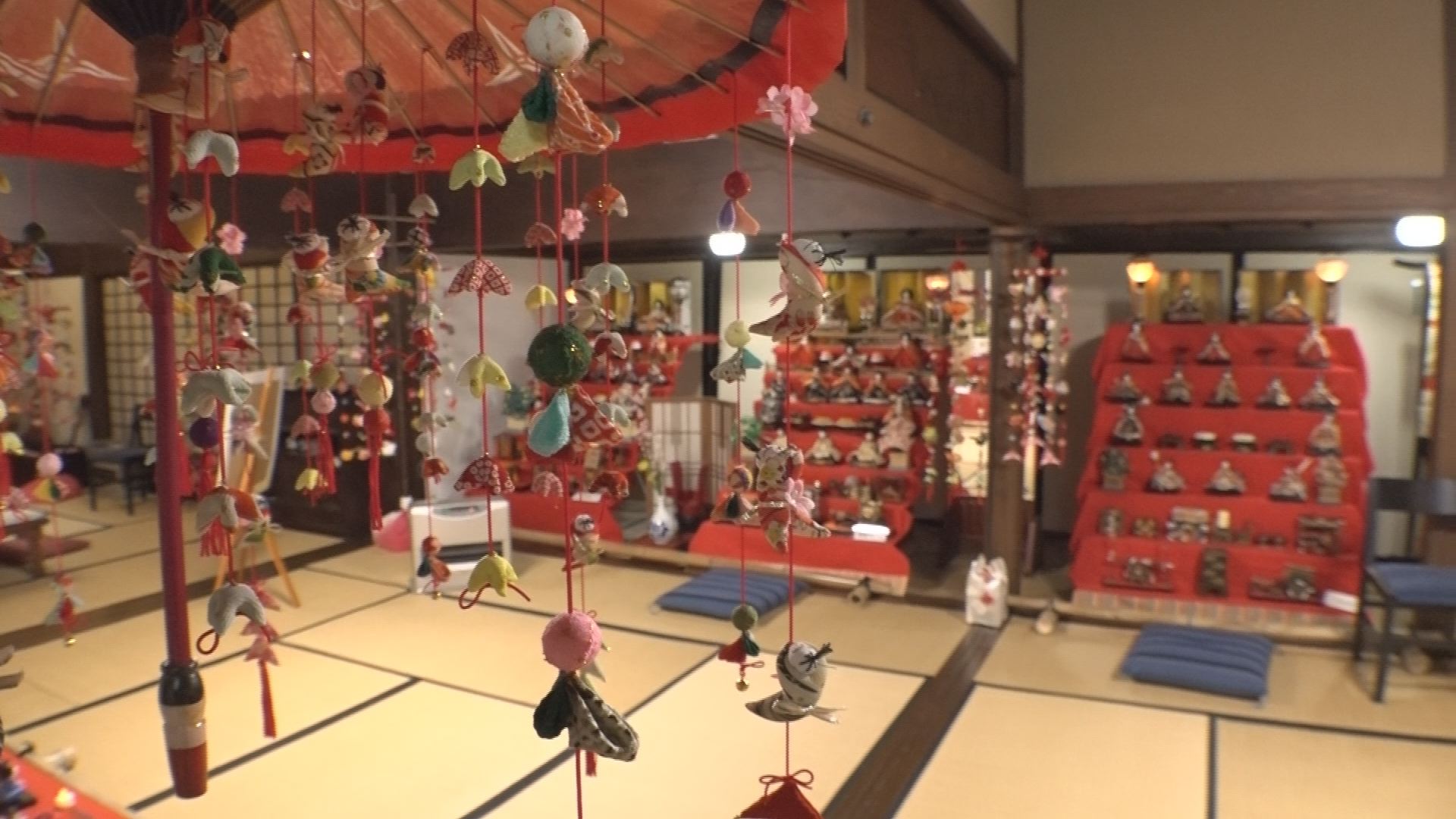 The Hinamatsuri Festival at the Sakaguchi Memorial Hall will be held until March 6. The annual event of serving sweet sake and enjoying Hina Gozen has been cancelled due to the Corona disaster.

A lively atmosphere to revitalize the city!

On the other hand, about 300 hanging dolls will be on display around Joetsu Myoko Station on the Hokuriku Shinkansen Line from February 15 (Tuesday). 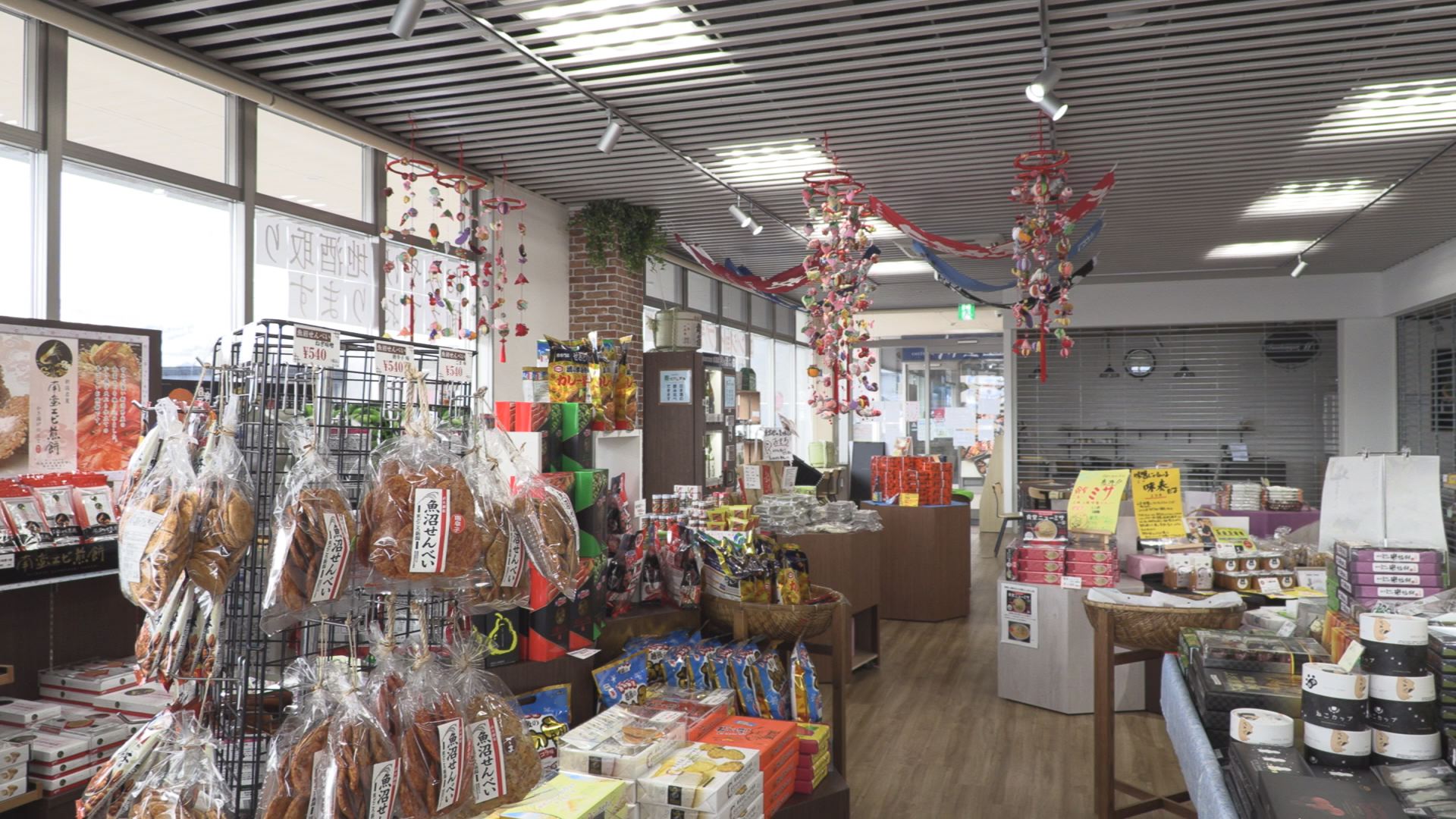 Enjoy Plaza 1st floor “Drop by and see us!

The event was planned by the “Walking with Joetsu Myoko Station Association,” a group of residents living near the station. Every year around this time, the group displays handmade hanging dolls near the station’s ticket gates, but as the number of bullet train passengers has decreased due to the Corona disaster, the group has divided the display into three different venues. 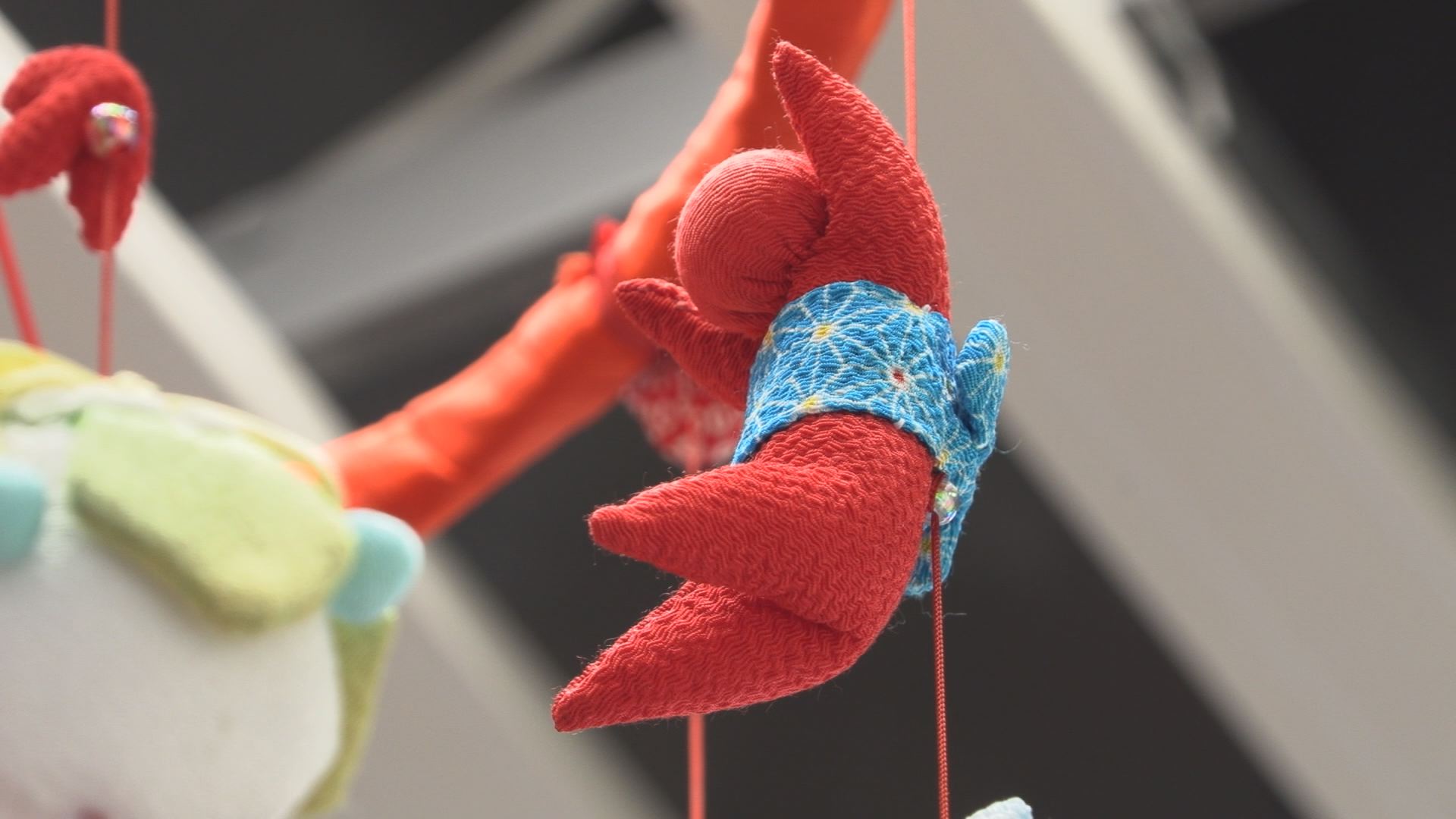 Each of the decorations contains a wish, and the monkey doll called “Sarukko” has the meaning of warding off evil.

Mr. Haruhiko Ishidaira, chairman of the association, said, “Despite the situation of the Corona disaster, we would like to revitalize the town by creating a lively atmosphere around the station. 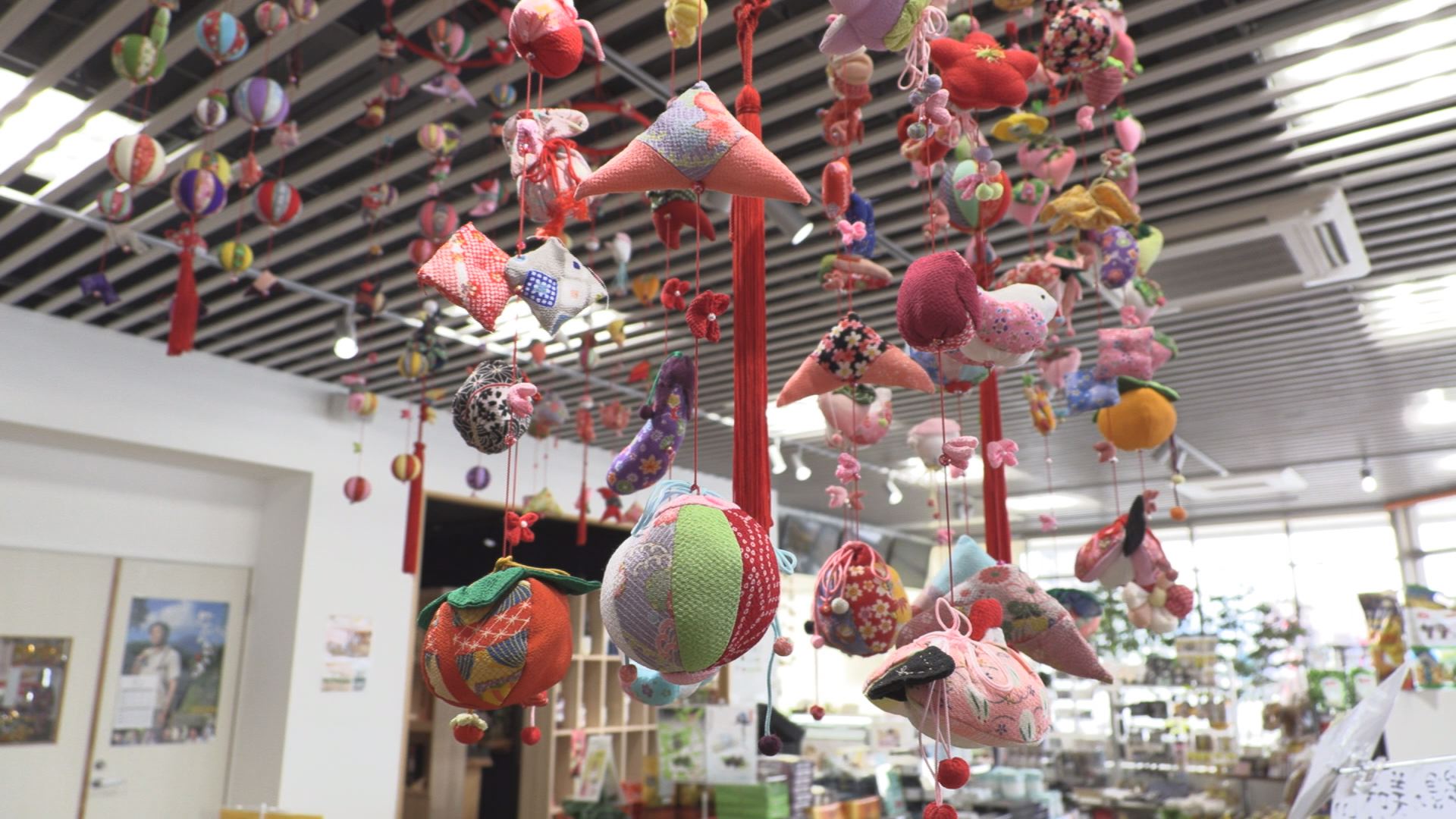 The event, “Hina Matsuri at Joetsu Myoko Station Kaiwai,” is on display at the station’s west exit, at “Drop by and see” on the first floor of Enjoy Plaza, at SAKURA Plaza inside the station, and at JA Echigo Joetsu Wada Branch near the station. The exhibition will be open until March 13.